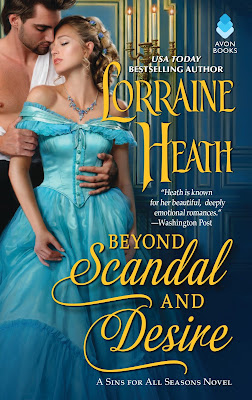 At birth, Mick Trewlove, the illegitimate son of a duke, was handed over to a commoner. Despite his lowly upbringing, Mick has become a successful businessman, but all his wealth hasn't satisfied his need for revenge against the man who still won't acknowledge him. What else can Mick do but destroy the duke's legitimate son-and woo the heir's betrothed into his own unloving arms . . .
Orphaned and sheltered, Lady Aslyn Hastings longs for a bit of adventure. With her intended often preoccupied, Aslyn finds herself drawn to a darkly handsome entrepreneur who seems to understand her so well. Surely a lady of her station should avoid Mick Trewlove. If only he weren't so irresistible . . .
As secrets are about to be exposed, Mick must decide if his plan for vengeance is worth risking what his heart truly desires.
PRAISE FOR BEYOND SCANDAL AND DESIRE:
"Heath builds a community of fascinating, intertwined characters that readers will be eager to get to know as they cheer for the driven hero and the spunky, smart heroine." -- Publishers Weekly
"RITA Award-winner Heath's new Sins for All Seasons series is off to an impressive start with an unforgettable, emotionally charged love story that will dazzle and delight readers with its exquisitely crafted characters, deliciously sensual romance, and impeccably rendered historical setting." -- Booklist/ *STARRED* Review
"For the first book in the Sins for All Seasons series, Heath returns to the world of dark London - a world she understands as well as Dickens. Heath illuminates the city's underbelly with a powerful romance of healing and redemption. Her talents for drawing readers into the era with her well-drawn, three dimensional characters and realistic dialogue sets her novels apart. The unexpected twists and turns of the plot guarantees it will be placed on your keeper shelf." -- RT Book Reviews/ "Top Pick" Review

How has being a Texan influenced your writing?
Texas has such diversity geographically (from plains, to forests, to mountains) and is so rich with history that it always spurred my imagination. I still have the Texas scrapbook that we had to put together in 8th grade that had sections on the various countries that had ruled over Texas, our fight for independence, our role in the Civil War, Texas Rangers (which was my favorite section), etc. That project gave me a true respect for history and a love of research.

Why did you choose to write romance?
I was never much of a reader until I discovered the romance genre, and then I simply couldn’t get enough of the stories. I loved the emotions they elicited, from joy to sadness to satisfaction when I reached that happy ending. I’d always wanted to be a writer, and once I read a romance novel, I knew the kind of stories I wanted to write.

Where did your love of writing come from?
I’m not sure where my love of writing came from. From the moment I learned how to write letters in the first grade, I became enamored with putting letters together to forms words, words to form sentences, sentences to form paragraphs, and paragraphs to create stories. I would write long letters to relatives, kept a diary, and wrote little stories. As long as I was writing something, I was happy.

How long have you been writing?
I was about 7 when I sat down and started writing a story about a fisherman who fell in love with a mermaid. As long as I can remember, I’ve been writing. But I didn’t start writing seriously with an eye toward publication until 1990.

What kinds of writing do you do?
I write historical romance and on occasion young adult (under the names Rachel Hawthorne, Jade Parker, and with my son as J. A. London).

What do you think most characterizes your writing?
I tend to write deeply emotional stories because I really want my characters to work for their happily-ever-afters.

What was the hardest part of writing this book?
Not making Mick a stalker. About ¾ of the way through, I had the uncomfortable feeling that his constantly arranging to cross paths with Aslyn was making him a bit creepish, so I reworked some of the book so she or other circumstances instigated a few of their encounters.

What did you enjoy most about writing this book?
Writing a heroine who doesn’t quite realize her own strength and is growing into her independence.

Who are some of the authors you feel were influential in your work?
LaVyrle Spencer, Patricia Gaffney, Laura Kinsale.

Which character from your book(s) is most like you?
I think all my characters have some aspect of me in them. Or they may have an aspect to them that I wish I possessed.

What did you find most useful in learning to write for publication?  What was least useful or most destructive?
The most useful thing I learned was to write what I love to read. I find generalized rules to be the least useful. For example, my second year as a published author, I attended a workshop given by a successful writer and she said to never have a prologue. It just slows the story down. I love prologues and I think they can be used to set up the story. So I think it’s important to write a story as it should be written and not to try to second-guess what rules will make it more marketable.

What’s something interesting, fun, or funny that most people don’t know about you?
In my youth, I took tap, jazz, and ballet and competed in a talent show at the county fair.

If you could time travel, what time period would you first visit?
Victorian England, the early years, shortly after Victoria came to the throne. England was on the cusp of change but still relatively dark. I think it would be interesting to start there and travel through the decades, getting a sense of how people and Society changed as industrialization took hold.

Do you have a mantra for writing and/or for life?
Try to bring joy to others. 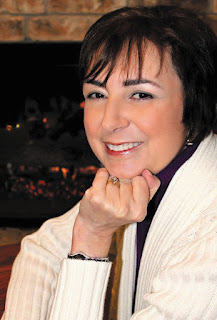 Lorraine Heath always dreamed of being a writer. After graduating from the University of Texas, she wrote training manuals, press releases, articles, and computer code, but something was always missing. When she read a romance novel, she not only became hooked on the genre, but quickly realized what her writing lacked: rebels, scoundrels, and rogues. She's been writing about them ever since. Her work has been recognized with numerous industry awards, including RWA's prestigious RITA. Her novels have appeared on the USA Today and New York Times bestseller lists. 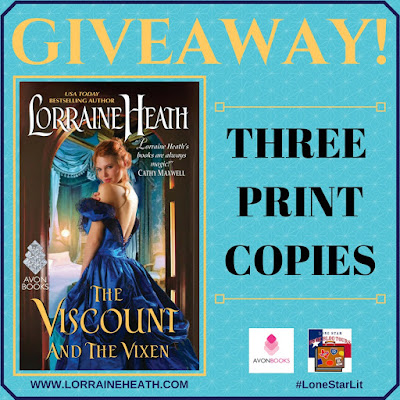