WALKING THE LLANO
A TEXAS MEMOIR OF PLACE
by
Shelley Armitage 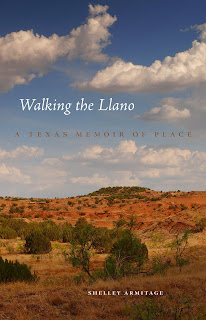 When American explorers arrived in the Texas Panhandle, they dubbed the region the “Great American Desert.” Its rough terrain appeared flat, dry, uninhabitable. Later, cell phone towers, oil rigs, and wind turbines added to this stereotype. Yet in this lyrical ecomemoir, Shelley Armitage charts a unique rediscovery of an unknown land, a journey at once deeply personal and far-reaching in its exploration of the connections between memory, spirit, and place.

Armitage begins her walk by following the Middle Alamosa Creek thirty meandering miles from her family farm to the Canadian River. Growing up in the small llano town of Vega, Texas, she finds the act of walking inseparable from the act of listening and writing. “What does the land say to us?” she asks as she witnesses human alterations to the landscape—perhaps most catastrophic the drainage of the land’s most precious water source, the Ogallala Aquifer.


But the llano’s wonders persist: colorful mesas and canyons, vast flora and fauna, diverse wildlife. While meditating on the region’s history, Armitage recovers the voices of ancient, Native, and Hispano peoples as interwoven with her own: her father’s legacy, her mother’s decline, a brother’s love.  The llano holds not only the beauty of ecological surprises but a renewed kinship in a world ever-changing.
Reminiscent of the work of memoirists Terry Tempest Williams and John McPhee, Walking the Llano is a soaring testimony to the power of landscape to draw us into greater understanding of ourselves and deeper connection with the places we inhabit.

PRAISE FOR WALKING THE LLANO

". . .an enticing mix of memoir, nature study and the hunting of ghosts. [ Walking The Llano] is a testament to the value of slowing down and watching where you are going." Ollie Reed, The Albuquerque Journal
". . .[Armitage] is an explorer, and from her book we learn much about people who settled [the llano] and those who must now make gutwrenching decisions about modern methods of energy extraction. . .a perfectly balanced memoir." Kimberly Burk, The Oklahoman
"With a cleareyed appreciation for landscape and our place in it combined with uncluttered flowing writing, Armitage establishes her place in the tradition of the best American nature writing." Mark Pendleton, INK
“Once you’ve ambled into the lyrical, evocative pages of Shelley Armitage’s ‘Walking the Llano’, the Plains will never seem plain again.” William deBuys , Author of A Great Aridness: Climate Change and the Future of the American Southwest
“Shelley Armitage’s prose is as poetic as it is intelligent. She masterfully weaves together her personal story with the narrative of the Llano, and she does so in a way that begs the question of what lies ahead for the people and the land she loves. If literature is a study of the human heart—and it is—then Walking the Llano is a quiet masterpiece.” BK Loren, Author of T heft:A Novel and Animal, Mineral, Radical: Essays


“In Walking the Llano, Shelley Armitage does for the Staked Plains what John McPhee did for the Northern Plains in Rising from the Plains. She carefully mines the history, character, and geology of the Llano Estacado and combines it with a compelling personal narrative to create an account that flows with lyricism, authenticity, and wisdom. A splendid and cleareyed book.” Nancy Curtis – Coeditor of Leaning into the Wind: Women Write from the Heart of the West


“A Habit of Landscape: The Draws”

One of my favorite childhood books was The Edge of Time by Loula Grace Erdman. It had a special place on the porch among my mother’s Reader’s Digest books, ordered monthly. I liked this novel because it was the only one I knew of set in the Texas Panhandle and it focused on a young married homesteading couple. Hardly the adventure script of the male western, it was a woman’s story, realistic rather than romantic. The title intrigued me even then, and now the frayed cover on my bookshelf reminds me of the question May Sarton posed after falling in love with the expansive Southwest. Why has this llano region not inspired significant literature? Why is there no poet of the plains?

Why indeed? I think of Mike Harter’s maps and an article he wrote called “The Highways of the Plains.” In it he explained how the Llano Estacado, the so-called Staked Plains, is a vast, flat plain that sheds its water stingily, mostly into playa sinks but also into draws that, he says, “are one of the few real drainages to be found here.” Several theories exist about the origin and meaning of the llano, of which the caprock is a part, but they all agree this “sea of grass” was formidable to travel, with miles and miles of seemingly featureless prairie and precious few water sources. These great conduits, the draws, were water highways holding water below the surface, and during cloudbursts, conveying water downstream in instant floods called “high rises.” More, they were highways for Native peoples, prehistoric and historic, because they provided shelter, possible water and food, and a route to water, as they held spring sites and culminated in the Canadian River. If pursued, a person could disappear into them.

In college I started jogging for fitness. I jogged five miles a day for 30 years. I sought out softer soils for running, and when home, I always ran at the farm. It became a local joke. “You still running?” someone would ask at the post office, eyeing my dusty shoes and worn out leggings. But the running taught me something. I began to learn that the land was lyric. If there was no poet of the plains, there was a poetry of the plains. I could feel the rhythm of its shape come into my legs, up into my chest and heart, and out my mouth as breath.

Later it came out as writing.

Mostly I ran along the edges of the draws, the more level wheat and milo fields on one side, the draws on the other. Later the asphalt of urban Honolulu claimed me after years of teaching and running there; arthroscopic surgery and worn out knees reduced me to a walk. To my surprise, walking was even more sonorous than running. I noticed things I had never seen before. Each walk was different. I felt like Barry Lopez, who says that after his 30 years of living on the same patch of land in Oregon he still finds something new. I took to the highway of draws.

This highway, I discovered, had a name. On Mike’s map it was labeled the Middle Alamosa Creek. Further checking of topographic maps and a large land map at the county courthouse revealed it as an “intermittent creek.” The Middle Alamosa is the central branch and largest of three Canadian River tributaries that empty into the Canadian River about 20 miles north, near the site of Tascosa.

There was one “alamosa”—or cottonwood—on our South Place, right in the middle of the widest expanse of the draw. And I knew along the Canadian and its valleys there were plenty of cottonwoods, some purposely planted by the early pastores for shade. Perhaps the Middle Alamosa got its name from the denser stand of trees near the river. Our single cottonwood was in its death throes. The standing water that sometimes surrounded it had no doubt rotted the roots. A porcupine would sometimes be seen napping on an upper limb—right about the raw strips where he had gnawed the bark, thus further weakening the hapless tree. Nevertheless, it was a testimony to water.

Middle Alamosa. I was amazed. According to the maps it headed on our land, right at what was Interstate 40—in the draw. What would I discover if I walked its 30-something meandering miles to the Canadian River?

“A Habit of Landscape: The Draws” is an excerpt of Walking the Llano: A Texas Memoir of Place, by Shelley Armitage (University of Oklahoma Press, 2016). It is reprinted by permission of the author and press. 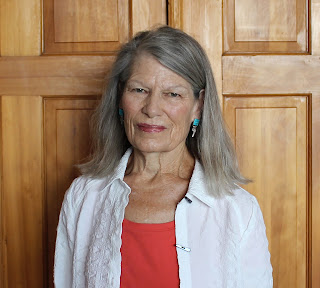 Dr. Shelley Armitage is Professor Emerita from University of Texas at El Paso where she taught courses in literature of the environment, women’s studies, and American Studies.  She is author of eight award winning books and 50 scholarly articles.  She resides in Las Cruces, New Mexico but still manages her family farm outside of Vega, Texas.

Armitage grew up in the northwest Texas Panhandle in Oldham County.  She owns and operates the family farm, 1200 acres of native grass—once part wheat and milo—bordering Interstate 40 on the south and near the Canadian River breaks on the north.  Armitage shared this landscape from her childhood on, riding with her father and grandfather to check crops and cattle and later jogging and more recently walking the farm roads.  Though most of her adult life has been spent away from the Panhandle as a university professor, Armitage has always returned to the “farm” which offered until recently a 360-degree view of earth and sky.  Wind energy farms, oil and gas, microwave towers, and strip mining have greatly altered her childhood landscape.
Throughout her distinguished university career, Armitage’s professional life offered her a connection with landscape. Because of senior Fulbright teaching grants in Portugal and Finland, a Distinguished Fulbright Chair in American Literature in Warsaw, a Distinguished Fulbright Chair in American Studies in Budapest as well as research, writing, and teaching in Ethiopia, the American Southwest, and Hawai’i, place has taken on special meanings.  As the Dorrance Roderick Professor at University of Texas at El Paso and a Distinguished Senior Professor in Cincinnati, she decided in her most recent book to write about the meaning of home place as connected to the land’s own ecological and human stories.
As the holder of three National Endowment for the Humanities grants, a National Endowment of the Arts grant, and a Rockefeller grant, Armitage nevertheless prizes a recent recognition from the United States Department of Agriculture most highly.  Commended for her “commitment to the spirit, principles, and practices” of the Conservation Reserve Program, Armitage has restored the farm to grassland in an effort to heal fragmented landscapes by recreating wildlife corridors and habitat.  Like the fragmented narratives of stories lost, she says: “If we could read the land like a poem, we might more intimately learn from it, understand what it says of natural and human cycles—and that sometimes uneasy relationship between them.” 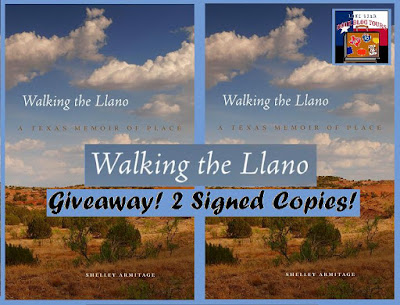 a Rafflecopter giveaway
CHECK OUT THE OTHER GREAT BLOGS ON THE TOUR: