Does A Writing Schedule Matter by Andy Peloquin

Does A Writing Schedule Matter?

Most writers make it a point to put in at least an hour or two of work per day on their creative projects. Perhaps their day job and their busy lives prevent them from doing more, but they swear on that 1,000 to 2,000 words per day.
But why? Does it really matter? Why not spend five hours on the weekend writing, instead of just writing an hour per day? What's the difference?
There is a very simple scientific reason to set a writing schedule: it makes it easier to write!
Science still doesn't understand what parts of the brain are responsible for new ideas. All the regions of the brain are connected via synapses and neurons, and all fire together to produce thoughts, feelings, emotions, and ideas.
Did you know that you can train your brain just like you can train a muscle? After going to the gym and doing a curl every day for a year, your body adapts to that exercise. The same with your brain! Sit down and stimulate the parts of your brain responsible for creativity, and your brain "adapts" to it. It's easier to trigger the neural pathways that lead to creation.
It's the same reason that most writers have their "habits"--the things they do before or during their writing time. For example:
All of the best writers have their routines, the things they do every day in order to "stimulate" the creative portions of their brains. Do you know why these routines work--or at the very least, appear to work? It's because the brain has linked those habits to creativity over the months/years of writing, so these things stimulate the neural pathways that lead to stimulating the creative part of your brain.
Are these habits or schedules really the most important part of your writing? Probably not, but they certainly help! You have so many other problems to deal with in your writing, so having something as simple as a pre-writing routine or a writing schedule can help you to make the most of your writing time.


Plus, as Bobby Robson loves to say, "Practice makes permanent". Practicing your writing at the SAME time every day will help you to get in the habit of being creative. You'll flex those creative muscles on a regular basis. The more you use your brain (which is basically a high-functioning muscle in many regards), the easier it will be to "flex your muscles" the next time you sit down to write!

Andy Peloquin: Lover of All Things Dark and Mysterious 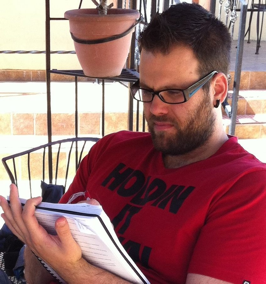 Andy Peloquin--a third culture kid to the core--has loved to read since before he could remember. Sherlock Holmes, the Phantom of the Opera, and Father Brown are just a few of the books that ensnared his imagination as a child.

When he discovered science fiction and fantasy through the pages of writers like Edgar Rice Burroughs, J.R.R Tolkien, and Orson Scott Card, he was immediately hooked and hasn't looked back since.

Andy's first attempt at writing produced In the Days: A Tale of the Forgotten Continent. He has learned from the mistakes he made and used the experience to produce Blade of the Destroyer, a book of which he is very proud.

Reading—and now writing—is his favorite escape, and it provides him an outlet for his innate creativity. He is an artist; words are his palette.

His website (http://www.andypeloquin.com) is a second home for him, a place where he can post his thoughts and feelings--along with reviews of books he finds laying around the internet.

He can also be found on his social media pages, such as:

10 Things You Need to Know About Me: 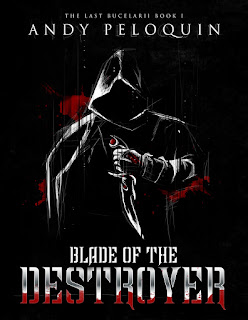 The Last Bucelarii (Book 1): Blade of the Destroyer
The Hunter of Voramis is the perfect assassin: ruthless, unrelenting, immortal. Yet he is haunted by lost memories, bonded to a cursed dagger that feeds him power yet denies him peace of mind. Within him rages an unquenchable need for blood and death.


When he accepts a contract to avenge the stolen innocence of a girl, the Hunter becomes the prey. The death of a seemingly random target sends him hurtling toward destruction, yet could his path also lead to the truth of his buried past?

"Creative, gritty, and beautifully dark...fantasy addicts will love it!" -- Peter Story, author of Things Grak Hates -- http://peterjstory.com/
"The fantasy world has a compelling new antihero…the Hunter will terrify and captivate you." - Eve A Floriste, author of Fresh Cut
"From the first words on the page this fantasy holds the reader spellbound even after the book is finished…his character is very well-defined even if his past is a mystery. Root for an assassin? Oh, yes, one must!" -- Carol Conley, for InDTale Magazine